Context is Everything~ Fidelity article March 2019 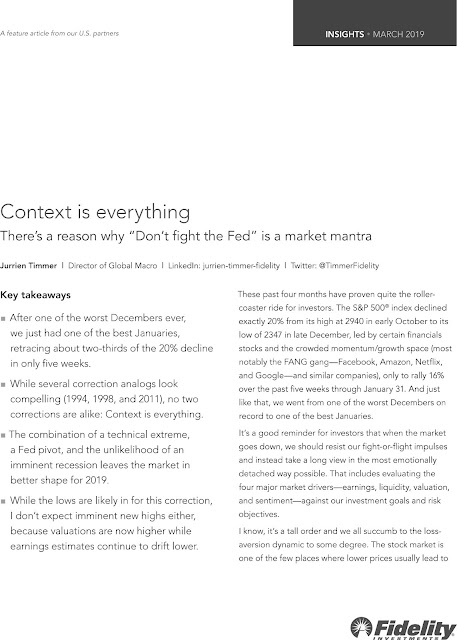 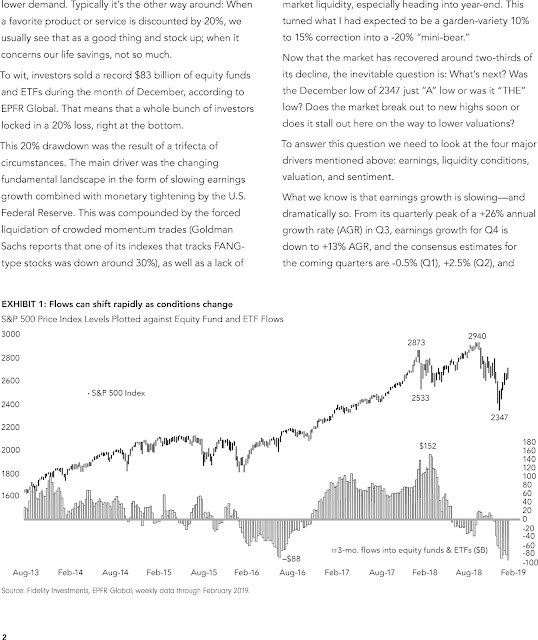 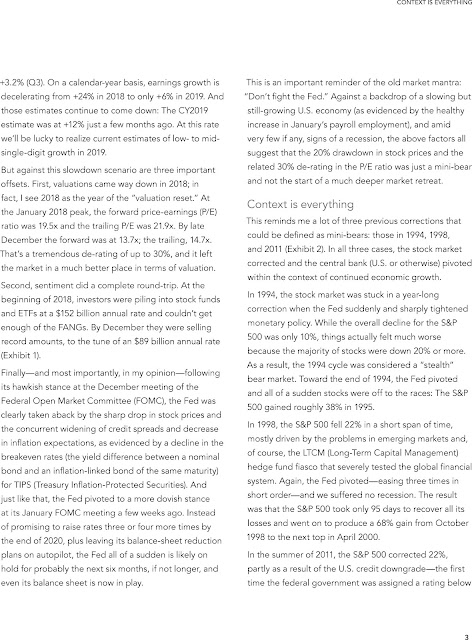 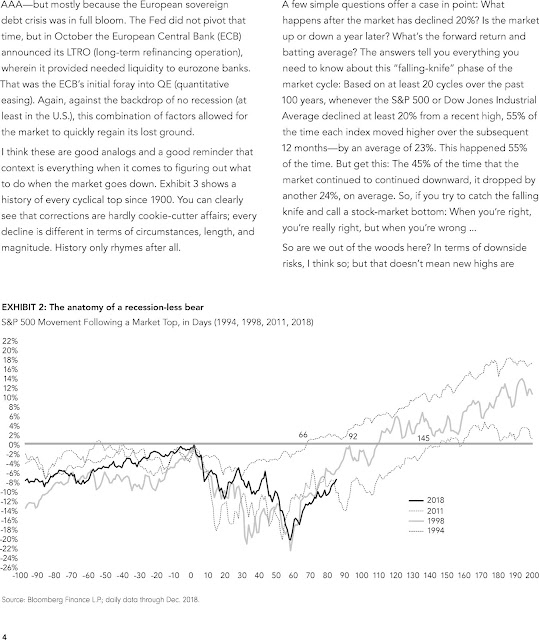 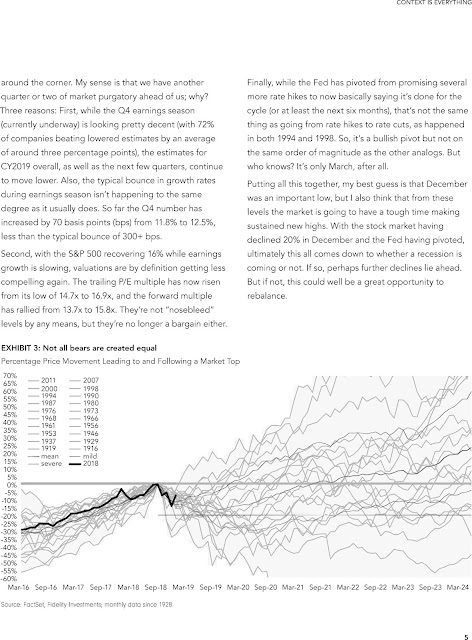 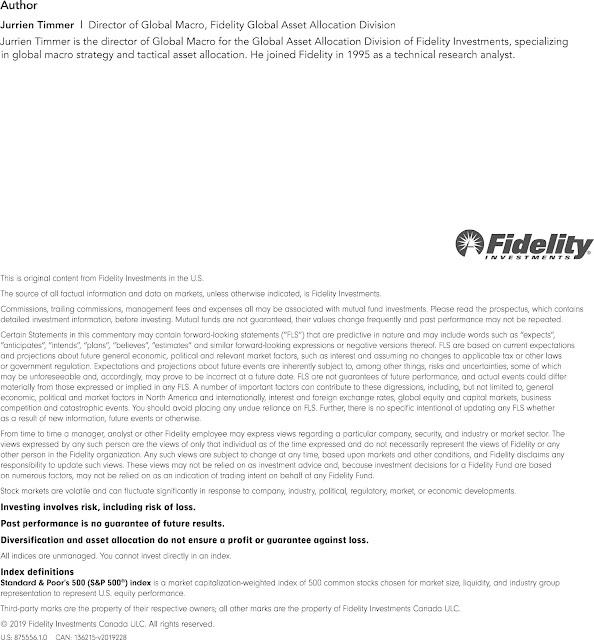 Posted by Robert Govan at 09:51 No comments:

It's been a bad year for Canadian Investors

A recent article in the Financial Post made me realize there may be some surprised clients when they open their third quarter statements in early October.  (I have included the link below.)
Much of what we have heard, until recently, has been positive news concerning the rallying stock markets in the US.   North Korea and not one, but two devastating hurricanes have tempered that slightly, but things are still fairly positive for US markets.
Canadian investors on the other hand have had a far different experience.  With two somewhat unexpected interest rate hikes bonds have been impacted quite negatively.  As well, the resulting 10% increase in the value of the Canadian dollar has wiped out most international gains we have made in equity funds.
We don’t feel there is any cause for alarm at this point, but thought it’s prudent to at least temper your expectations as you open your September 30th statements.
As always, if you have any questions, please do not hesitate to call or email.
Thank you for placing your trust in Govan Wealth Management.
Bob


The information contained in here is for general information purposes only and is based on the perspectives and opinions of the owners and writers. It is derived from various sources and is subject to change without notice. Every effort has been made to compile this material from reliable sources; however, no warranty can be made as to its accuracy or completeness. Before acting on any of the above, please contact me for individual financial advice based on your personal circumstances. Commissions, trailing commissions, management fees, and expenses may all be associated with mutual fund investments. Mutual funds are not guaranteed, their values frequently change and past performance may not be repeated. Please read the prospectus and the fund facts before investing.
Posted by Robert Govan at 18:25 No comments: 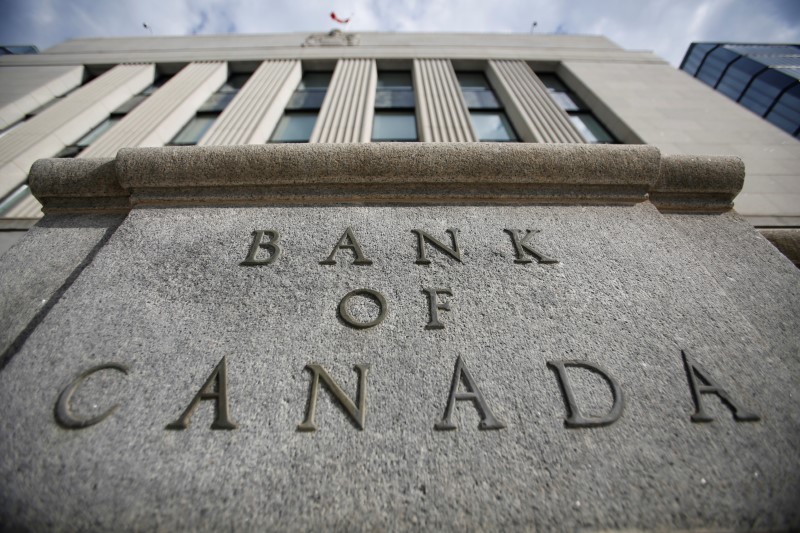 By Leah Schnurr
OTTAWA (Reuters) - After years of debt-happy Canadians being warned that borrowing costs would have to rise eventually, they may be about to face a reckoning if the Bank of Canada hikes interest rates next week, as many expect.
Canada's likely "lift off" on Wednesday - which would bring the country's first interest rate increase in nearly seven years - comes at a time when the economy still faces a number of headwinds, including weak inflation and the expected renegotiation of the North American Free Trade Agreement (NAFTA).
But with the economy and labor markets growing, the Bank of Canada began laying the groundwork for hikes with a sharp shift in tone last month. Markets are pricing in more than 90 percent odds of a quarter-percentage point increase on July 12, while a second hike is expected by the end of the year.
Economists in a Reuters poll were more divided on whether the bank would move next week, with the median forecast pointing to a hike in the fourth quarter. [CA/POLL]
Cindy Fuailefau is six months into a debt repayment plan after she accumulated more than C$41,000 ($31,847) in debt and was unable to keep up the payments after her husband stopped working due to a back injury.
"That was all just trying to live, not vacations or anything," the 56-year-old said.
Canadians as a whole owe C$1.67 for every dollar of income, a near record high. TransUnion said in a report last year that more than 700,000 consumers would struggle with even a quarter-point hike in interest rates.
Where the average person seeking help 20 years ago owed about C$12,000, now it is not uncommon to see people with C$100,000 in unsecured debt, said Scott Hannah, president of the Credit Counseling Society.
"We've just become very comfortable over the past decade carrying debt," Hannah said. "No one is paying attention because ... rates have remained low."
ALREADY FEELING THE PAIN
Canadians may already be feeling a squeeze.
Canada's 5-year yield has soared more than 50 basis points to 1.47 percent since hawkish comments from top Bank of Canada officials last month. Royal Bank of Canada (TO:RY), the country's biggest bank, has already raised rates on fixed-term mortgages ahead of the central bank announcement. Mortgage rates are typically based on 5-year bonds.
That is an important signal to Canadian households that their situation may be about to change, said Frances Donald, senior economist at Manulife Asset Management.
"It also, critically, implies that the economy is already going to feel higher interest rates, even if the Bank of Canada holds (on) Wednesday," Donald said.
While a 50-basis point increase would still leave rates at a relatively low 1 percent, it could be enough to prolong the recent cooling in the Vancouver and Toronto housing markets. It could also slow demand in cities that have not seen the same rapid price increases and are therefore more interest rate sensitive, such as Ottawa and Montreal.
"On the lower end of the market, entry level product may be impacted a little bit more because they're a bit more sensitive to those rate hikes," said Adil Dinani, Royal LePage realtor in Vancouver.
The biggest question of all remains whether the Bank of Canada plans to stop after two rate hikes, thereby removing the stimulus it added in 2015, or whether it is embarking on a longer tightening cycle.
"If this is the beginning of a tightening cycle that will persist for several years, that will have a pronounced impact on homebuyers, business investors and general households," said Donald.
But for those who were able to get ahead of the curve and pay down debts, the potential higher interest rates will be more bearable.
Over four years ago, Charis Sweet-Speiss found herself laden with C$67,000 in debt across 13 credit cards as she struggled to meet mortgage payments on her British Columbia's Okanagan Valley house despite the low rates.
Now, Sweet-Speiss, who is on a repayment plan, plans to finish paying the last of her credit card debt in August, and hopes to have her house, and the line of credit she borrowed against it, paid off in three years so she can retire.
"The rates now, I've heard they're going up, and I am so grateful I'm not in that situation any more."
($1 = $1.2877 Canadian)
Written By: Reuters

Posted by Robert Govan at 13:08 No comments:

New Regulations for Titles of Financial Planner or Advisor

We are happy to see the Government is finally acting on this. This will ensure that only those whom are qualified to call themselves a Financial Planner can do so.

Here is an excerpt from a recent communication from The Canadian Financial Planning Standards Council. We feel it is important that the Consumer will be able to clearly define the differences between Planners and Advisors.

The Government of Ontario released the 2017 Ontario Budget: A Stronger, Healthier Ontario.

FPSC was pleased to see included in the budget a reaffirmed commitment from the government to moving forward in the coming year with new regulatory standards for financial planners, based on the policy recommendations contained in the Final Report of the Ontario Expert Committee to Consider Financial Advisory and Financial Planning Policy Alternatives.

Specifically, the government committed to closing “the gap that currently allows financial planners to perform their valuable work without regulatory oversight or specified proficiency requirements”, by restricting the title “financial planner” to individuals who are qualified, ethical, overseen and accountable to an appropriate body for their professional conduct. The government also reiterated their intent to concurrently restrict other related industry titles that can confuse and mislead consumers.

While most of these budget details had previously been announced, we are nonetheless pleased to see the government’s explicit recognition of the vital work performed by “financial planners”, and their continued commitment to enhancing protections for the consumers who rely on them. FPSC looks forward to working with the government and other regulators and industry stakeholders in the coming months to build on this momentum. 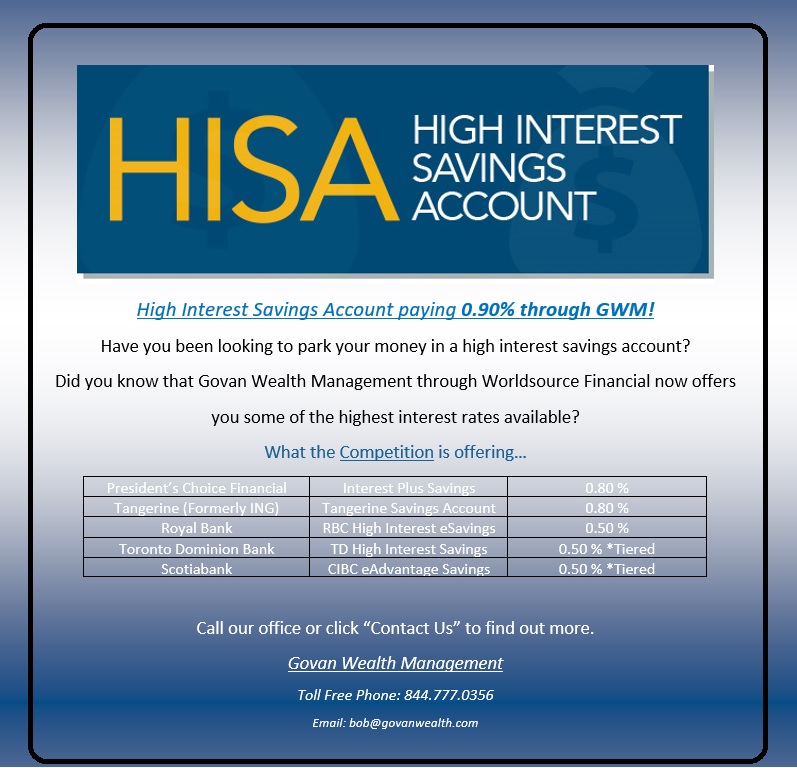 Rates do change, please call the office for current rates.
Posted by Robert Govan at 15:55 No comments:

Why should you invest? Posted by Robert Govan at 14:26 No comments:

The fourth quarter of 2016 delivered more unexpected events, continuing with what had already been a surprising year. Few people predicted Donald Trump’s victory in the U.S. presidential election, a result that had a strong influence on capital markets. Although stocks initially sold off after the vote, investors soon turned back to equities, anticipating a pro-growth Trump agenda characterized by tax cuts, reduced regulation and increased infrastructure spending. The “Trump effect” was even more pronounced in U.S. and global bond markets, where yields rose dramatically as prices fell.

Most global equity markets advanced in the fourth quarter, resulting in generally solid results for the year. The MSCI World Index rose 2.0% in U.S. dollar terms during the three-month period, bringing its gain for the year to 8.2% (4.9% in Canadian dollars). The S&P 500 Index, a broad measure of the U.S. equity market, was up 3.8% for the quarter and finished 2016 with an increase of 12.0% (8.6% in Canadian dollars), including dividends.

Canada’s equity market, meanwhile, completed a strong turnaround from the previous year’s weak results, finishing as one of the world’s best-performing markets in 2016. Canadian energy and materials companies were buoyed by rising prices for oil and other commodities. Supportive business conditions and a post-election rally in Canadian bank stocks, based on the expectation of higher global interest rates, helped to boost the market further. The benchmark S&P/TSX Composite Index climbed 4.5% in the fourth quarter, capping off an impressive 21.1% gain for the year. Overseas, markets were somewhat mixed, with strong quarterly results in Japan, Britain, Germany and France, while Hong Kong’s Hang Seng Index lost ground amid relatively tepid results in Asia. China’s Shanghai Index was up in the fourth quarter, but finished the year with a loss of more than 12% in local currency terms.

Based on uncertainty in the global economy, bond yields had remained depressed for most of the year, but sharply reversed course in the fourth quarter, reflecting the market’s anticipation of U.S. fiscal expansion and higher inflation with Trump’s election. Although not unexpected, the U.S. Federal Reserve announced a long-awaited 0.25% increase in the federal funds rate in mid-December, causing bond prices to fall further. The yield on the benchmark U.S. 10-year government bond, which had reached a record low in July, climbed 53% during the quarter, finishing the year at 2.44%.

Canadian bond yields also rose in this context, but the Bank of Canada kept its overnight lending rate unchanged at 0.50%, citing significant slack in the Canadian economy and lingering uncertainty in the global economy. The FTSE TMX Canada Universe Bond Index, a broad measure of Canadian government and corporate bonds, lost 3.4% for the three-month period. The index remained positive for the year, however, adding 1.7%.

Although 2016’s surprises – which in addition to Trump’s victory include the decision by the U.K. to leave the European Union and an agreement by many oil-producing countries to limit their output – created volatility and uncertainty in the capital markets, they also created opportunities for experienced investors, and will continue to do so in the coming year. I continue to recommend a diversified, professionally managed portfolio that is tailored to your individual investment objectives to take advantage of opportunities as they arise, while protecting your investments from further volatility.

In closing, I would like to wish you and your family all the best for the year ahead, and to remind you that I am just a phone call away should you wish to discuss your investment portfolio in greater detail.

Bob
Posted by Robert Govan at 14:22 No comments: